Posted on June 21, 2018 by ThePolkaDotPatriot

AG just did a big release!

No Molly (SADNESSSS!!!!) but plenty of other adorable things to make my money vanish!

[All images belong to American Girl]

I’ve heard that she may have a new, lighter skin tone? Anyway, she sort of makes me think of Lanie, with green eyes instead of hazel, etc. 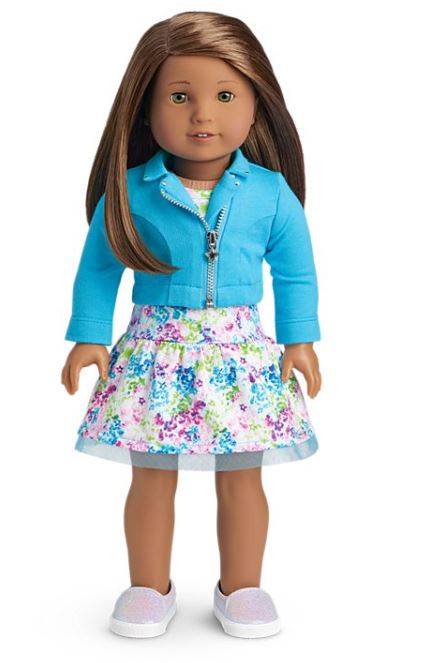 Aww, she’s cute!!! I really don’t need another Jess mold, but I think she’ll be very popular. (And may even help Kanani’s crazy high prices to go down… 😉 )

First of all, I’ve been mooning over the CYO dark skin Josefina molds that others have been posting on Instagram. BUT…the CYO dolls have pretty dark, well defined lips, which TM 80 really doesn’t have. Her skin also looks shiny, like AG skimped on their vinyl sealant. So, although I wish I loved her as much as the CYOs (I can’t see myself spending $200 on an AG doll), I really don’t. 😦 I would like to see her in person, though.

Aww, 33 looks nice in these. The colors are some of my favorites, and the sushi theme (even though I don’t actually like sushi!) is fun. I probably won’t be picking these up, though.

The PJs got their own bunk bed set! This is cute, on trend and relatively versatile. I feel like AG was a bit skimpy on the pillows and blankets, though. What’s included could easily have just been for 1 bed.

Okay, now we’re moving to what I like to call, the ‘little-brother-friendly’ section:

Yay! More boy doll things! I think the theme on these could be used as either constuction or more superhero themed. It does look like something a little boy of the target age would wear.

Apparently the chair doubles as a speaker, but everything else is pretend. I’m not a video gamer…my brother and I were always encouraged to play outside in nature when weather permitted…but for the demographic that is, I can see this being popular. It seems maybe a little high priced for just some plastic and a speaker, though. 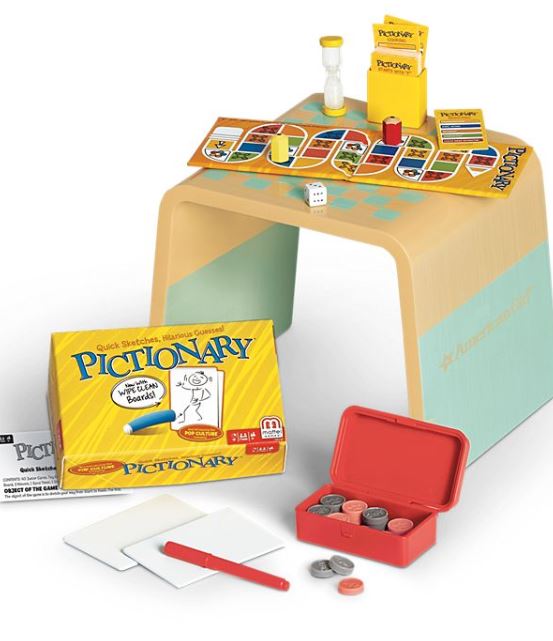 This is cute and trendy, but probably not for my collection. 🙂

This is really cute! I would consider it if it weren’t for the $75 price tag! C’mon, AG. $50 would have been more reasonable, and ya probably would still turn a decent profit.

I like the shirt. It looks a lot like some of the Etsy offerings I’ve seen for AG boy dolls. The shoes are okay, I guess. I’m not really feeling the camo pants though! Still, I’ll probably get it. Stuart and Winston could always use some more clothes! 😀

I wonder how easy it is for the dolls to hold those chopsticks? 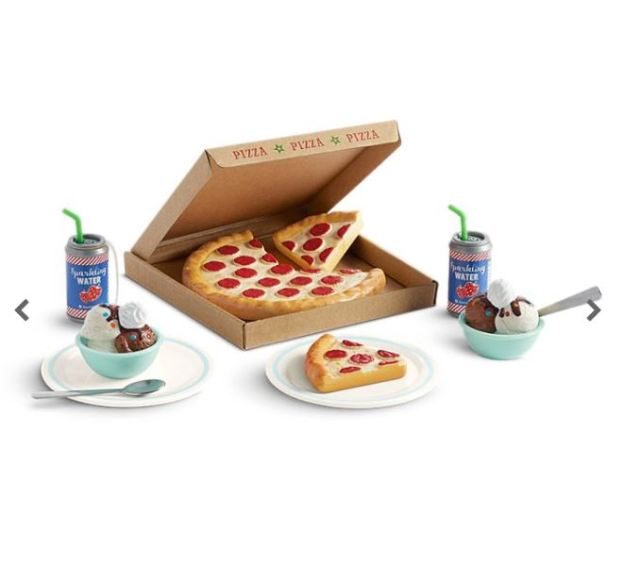 This is okay and relatively realistic, I guess. I don’t know much about doll food.

Fun Fact: I don’t like pizza. I will eat it if I have no other options, but…

Finally an RC Car, yay! It sounds like it even does the rear turn signals. High priced, though. I prefer Julie’s VW Bug, myself. 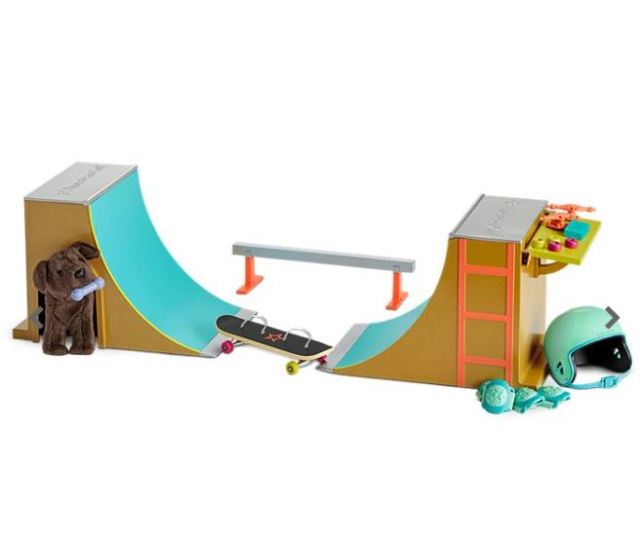 I like the little place for the puppy to hang out. And yay, safety gear is actually included in the set! I think if I got this I’d use it once or twice and then it’d just take up room.

Cool! This would be a great photo story prop. 🙂

Okay, that’s all the ‘little-brother-friendly’ stuff. 😉

I love everything about this outfit except the shoes. And maybe the pants could have been shorts? Anyway, 64 (?) looks super cute in this and it’ll probably make it’s way home to me eventually. 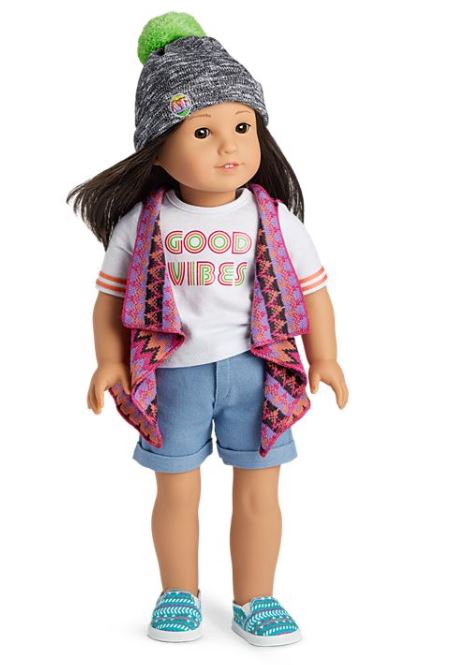 I really like the shorts and shoes, but the rest of the outfit isn’t my style.

Okay, I’m going to skip the new Cheer and Gymnastics outfits (not my thing), the Basketball outfit (which looks a lot like one of the old ones), and the dance outfit (because that leotard looks pink, not red). 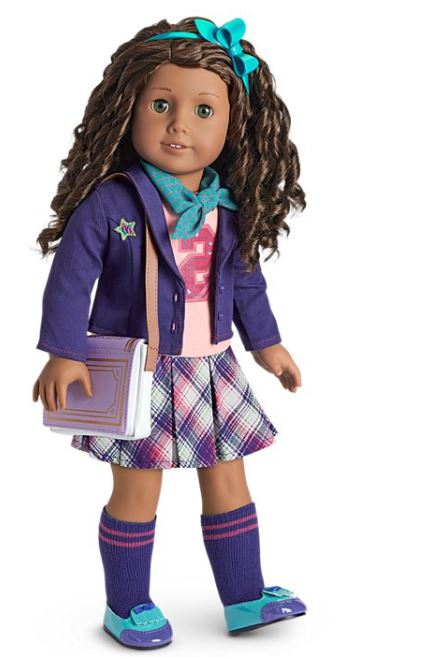 I’ve already heard a lot of people express an interest in this outfit, but for me, there’s just too much going on. I like most of the pieces separately (that headband! <3) but if I purchase this outfit I will not pair it together like this.

AG also came out with new fashion accessories: the Glittery Watch, and Best Friends Bracelet Set (which retail for $8), and the $10 Sweet Pairings Earrings Set. They are all pretty and will probably sell well.

The last 2 items are from Luciana’s collection.

The pompom headband is a little hideous, but the dress does have mix and match potential. I can’t see myself purchasing it at the moment.

The purse, hair ties, lip balm, bracelet and ring are nice, fit with Luciana’s theme, and are definitely something you’d find belonging to a girl her age. The passport, though…it looks incredibly fake! It’s light purple. Am I missing something?

Well, that’s all for now! If you made it all the way through my ramblings, congratulations!

(I will be posting thoughts on the historical stuff soon.)

So…what did you think of the [modern part of the]new release?!?

A Patriotic American. An American Girl Fan. https://www.facebook.com/thepolkadotpatriot/
View all posts by ThePolkaDotPatriot →
This entry was posted in New AG Stuff. Bookmark the permalink.

What did you think? Cancel reply